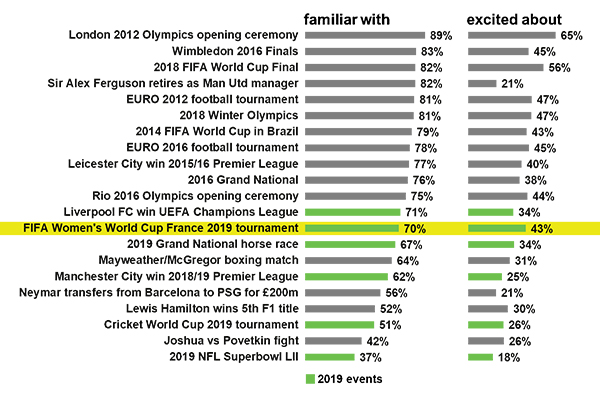 While the England Women’s team fell at the penultimate hurdle, the tournament drew record viewing figures, peaking at 11.7m in a prime BBC One slot for the team’s semi-final loss against the United States.

We see the same enthusiasm in our Harris Buzz numbers above, our monthly national poll of what’s going on in sport, entertainment, media and tech, which we’ve been running since 2010. Clearly the 2019 tournament in France has proved to be a turning point for women’s football and perhaps women’s sport in general.

Despite being recognised as the most exciting One Day International of all time and, unusually for cricket, being broadcast free-to-air on Channel 4, England’s narrow victory over New Zealand in the World Cup Final is almost at the bottom of our list, demonstrating just how much cricket has fallen off the radar of the UK public in recent years.