"The benefits are many and tangible" 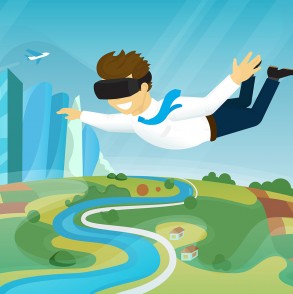 Though virtual reality has a history tracing back to before the 1940’s, the last 15 years of the 21st century have been crucial in its development. In the last 2-3 years we have seen technology and entertainment companies launching one after the other their virtual reality devices. Google cardboard viewer, HTC vive, Oculus Rift and Samsung Gear VR are just some of the devices launched to name. The technology once mostly associated with gaming has now penetrated a very diverse range of sectors spanning the arts, engineering, entertainment, military, sports and education. The possible purposes for which virtual reality can be used are vast, ranging from a tour inside Buckingham Palace to training Navy personnel and treating phobias.

The travel industry has embraced the game and the early adopters have already reaped the benefits. Marriott Hotels in their ‘Travel Brilliantly’ marketing campaign have used VR to ‘transport people from London to Maui in 90 seconds’. Other travel companies such Thomas Cook are also offering virtual reality tours in a selection of their stores. Thomas Cook reports an astonishing 190% increase in their ‘Try before you Fly’ VR-promoted New York excursion revenue where customers can take a helicopter tour of Manhattan.

As travel agents, hotels and even airlines and cruise companies embrace VR I cannot stop myself from wondering about the benefits VR could bring for market research in general and more specifically for research in the travel sector. At the current moment we see most travel research focusing on reported information even though it is largely recognised from the fields of cognitive psychology and behavioral economics that respondents struggle to be objective in reporting their own experiences and can be biased by how questions are presented, general context and their own memory. What is exciting for me as a researcher, is the wealth of possibilities for market research to use VR! As Elvis would put it we need a little bit less conversation a little more action.

We are now able to use the technology of VR to transfer our participants to the location we want to research – hotels, means of transport and destinations – in order to assess their real-time experiences, and at the same time offering them a much more interesting research experience in opposition to filling tedious and repetitive questionnaires.

Testing new or improved services of our travel clients is another option. For example, how does it feel having this super-indulgent menu on a cruise or this room decoration in this hotel? VR could potentially be used by market researchers to indirectly promote the researched client service/destination but the effect of VR in longer-term consideration remains to be answered. Nevertheless, with the help of VR now we cannot only collect much more truthful responses but we are also able to collect richer data such as attention and perspiration patterns.

The benefits of VR in the case of travel research are many and tangible, and I for one am really excited to see how this develops within market research sector.