The sun goes in; the clouds come out

Last July we reported on the public’s reaction to Chancellor George Osborne’s big, and rather sunny, first Budget of the new Parliament, following the Conservative’s General Election victory and unexpectedly positive economic growth figures: like when you discover some nice crisp notes tucked away in your holiday handbag.

But, just when you think Spring might be around the corner, you are told to prepare for more storms. And so it was yesterday, with Osborne warning of a “dangerous cocktail” of global risks and announcing a further £3.5bn of spending cuts to come by 2020.

It wasn’t all doom, with the all-round pleaser of the personal allowance raised again, now up to £11,500. This was greeted by a general hurrah amongst our Harris24 survey1 respondents, whose opinions we sought yesterday just after the Budget announcements. 69% agreed the personal allowance increase is good for the country, with 74% saying it will have a good or very good impact on them personally – the most well received of the major announcements. 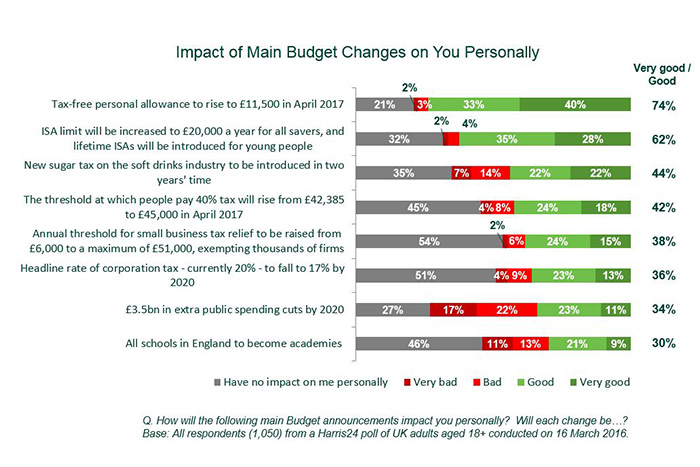 Jamie Oliver’s exuberant face yesterday showed how much the government backing his call for a sugar tax means to him. Well he can smile some more in the knowledge that the British public are with him too, with 55% in agreement with this measure (compared to 24% disagreeing it’s good for the country). The proportion saying it’s good for them personally is lower though, at 44%.

Across other areas it’s gone down as a bit of a mixed picture:

This was Labour’s Jeremy Corbyn’s first Budget – except he could sit back and enjoy the view from across the bench. And he did not hold back in his commentary, claiming: “This is a Government with failure on the police, failure on the National Health Service, failure on social care, housing and education” – a sentiment that 48% of those we asked agree with, compared to only 22% disagreeing.

However, that doesn’t necessarily mean that people think Corbyn would do a better job: the Conservatives still lead on voting preference (34% share, vs. 30% for Labour, with the Lib Dems on 7%). And when asked to judge Corbyn’s first six months as leader of the Labour party, only 28% say it’s been good or very good, with 45% saying it’s been bad or very bad (27% are unsure).

So what of our membership of the European Union (EU), which Osborne is receiving criticism for dragging into his Budget speech? Well, according to the general sample we spoke to yesterday, the ‘in’ vote has it, with 40% wishing to remain a member of the EU, and 33% wishing to leave. Whilst 6% cannot or will not vote in the referendum in June, 22% intend to but have yet to make up their minds: the news, debates, information and opinions they respond to in the next three months will determine which road we walk down.

Whilst split on some of the Budget changes and Osborne vs. Corbyn, when looking across the pond at the Presidential race stateside, we’re much more united. According to our survey sample, if it were up to the British population, a Democratic victory would be guaranteed, with Hillary Clinton making history as the first female President of the United States with a 63% share of the vote amongst those expressing an opinion – streaks ahead of fellow Democrat Bernie Sanders (17%), with Republican Donald Trump the choice for only 14%, and Ted Cruz (4%) and John Kasich (2%) a distant fourth and fifth.

Whilst 25% of the UK population find the US nomination campaign interesting, 31% feel it’s embarrassing, and 38% consider it downright alarming. The fact that we live on this side of the water in our relatively calm and courteous political landscape may perhaps be of some comfort as we button up our coats and pull out our umbrellas in preparation for those passing showers.