The nation reacts to Leicester City winning the Premier League 2016

On Monday 2nd May 2016 Leicester City secured their first ever Premier League title. At the beginning of the season they were given odds of 5000-1, yet they have done it!

After Leicester’s win, we took to Harris 24 to ask the public what they thought about it. In less than 12 hours we talked to 2,000 people and captured their reactions.

It has captured the nation’s attention! 85% are aware of Leicester City winning, even though only 70% are interested in football.

Tottenham Hotspurs’ last result (a draw with Chelsea) sealed the title for Leicester and ended Spurs’ hopes of winning the League, so perhaps it is not surprising to see most upset in the Tottenham fan camp. 27% of Tottenham fans were either unhappy or very unhappy about Leicester’s win. However, 45% were good sports and said they were happy for Leicester.

As you can imagine the vast majority of Leicester fans are very happy about winning the Premier League. However, let us look at what supporters of the so-called “big teams’” think.

The “big teams’” supporters have also embraced Leicester’s success. Manchester City fans lead on happiness (74%), followed by Liverpool and Arsenal (both with 72%). Chelsea and Manchester United fans are slightly less pleased for Leicester (67% and 64% respectively). However, they are a lot happier for Leicester than the Tottenham fans! 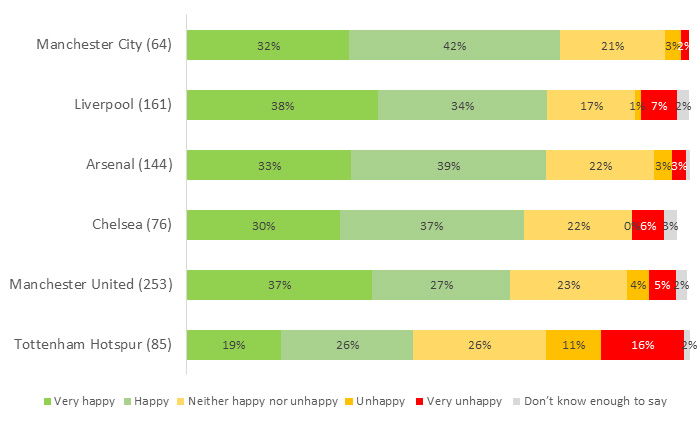 When asked what are the first words that come to mind when thinking of Leicester City winning the Premier League this is what the public said: 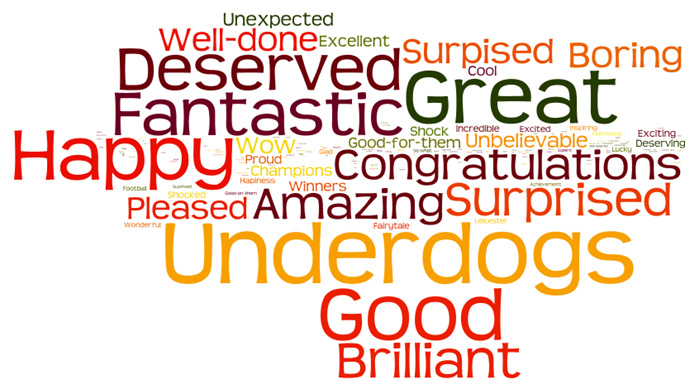 For most of the nation the sentiment is well done Leicester City!

This study was conducted to show how quickly Harris 24 can measure opinions – in this case 2,000 nationally representative (16yrs+) responses in less than 12 hours.