Consumer spending has undergone a revolution over the past decade with shops, restaurants, pubs and online retailers benefitting from a continuing explosion and growth in the use of payment cards. Cards are accepted in more and more places than ever before and with innovations such as contactless cards and digital wallets, and this trend is sure to continue.

We are now in a society where credit card companies reward their product users in a variety of ways, whether it be cashback or through a loyalty-based points programme. There are a number of alluring reward credit cards available to borrowers from brands which the average consumer would regard as a retailer and not a financial product provider.
Supermarkets are not just where you go to pick up your groceries anymore; you can now go and get your foreign currency, take out an insurance policy or acquire a credit card in them. Sainsbury’s, Tesco and Marks & Spencer are now all firmly placed in the financial product market and at the moment, they seem to be here to stay.

Our latest wave of Customer Power, the Harris Interactive Customer Relationship Survey, has shown that some of these household retail brands are starting to reduce the traditional big players’ grip in the credit card market, as customers are ranking them noticeably higher in terms of ‘Overall Satisfaction’, ‘Customer Relationship Score’, ‘Trustworthiness’ and ‘Feelings of Being Valued’.

However, when customers search for a credit card, they are faced with a plethora of deals to choose from. Supermarkets might not necessarily have been top of mind when looking to get a credit card in the past but now they are offering customers value for money and they are retaining customer loyalty through offering periodic rewards.

Supermarket credit cards more often than not allow the customer to forego paying an annual usage fee (which are associated with a number of high street cards), and then you also get longer term 0% APR offers and you are rewarded for spending with points or cashback. If you regularly shop at a major supermarket using its own branded credit cards, then as a consumer, you are in a “loyalty is rewarded” situation!

The chart below shows the trend over the past two years amongst customers of retail credit cards and customers of four of the major players in the UK credit card industry in regards to the extent they agree that they are rewarded for their loyalty. 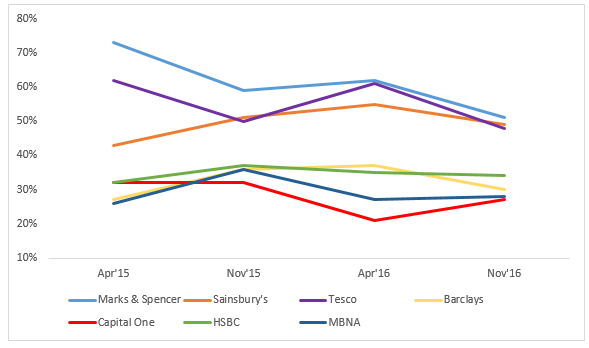 What is initially evident from the chart is the clear gap in agreement levels, with retail credit card holders much more likely to agree they are rewarded for loyalty than credit card customers at the traditional big market players. Furthermore, something else which can be seen is that even though these retail credit card providers are sprinting ahead of the rest of the pack, Marks & Spencer and Tesco customers have seen recent drops in the proportion agreeing they are rewarded for loyalty, after both providers took decisions to reduce their reward points offered going into the early part of 2016 to meet European regulatory requirements. Perhaps Sainsbury’s increase in the proportion of credit card customers feeling rewarded for loyalty from 2015-16 could well be as a result of them bringing out a leading 0% deal to market in 2015.

Just last week Tesco took the interesting, yet unsurprising step of freezing their new current account sign ups after unprecedented demand for an account guaranteeing interest rates of 3% until 2019. As part of the account, holders also benefit from an increasing amount of Clubcard points available for in store purchases to 1 point per £1 spent. I am wondering if maybe they are shifting some of the rewards which they saved from the credit card reward change in 2016 to the new current account in the race to retain customer share?

You don’t get much free in this world, but when a retailer is willing to ‘reward you’ for doing your shopping with the credit card, then the attraction is going to entice people to spend, spend, spend.

I think the major retailers are playing a very shrewd move by retaining customer loyalty and increasing profit by enticing the savvy shopper to part with their hard earned cash in their businesses. Retail based companies frequently outshine most other businesses in industry customer service awards, so by them bringing together in a perfect union their established records of customer service together with deals targeted at their customers, you can only see longevity in this relationship.