The Cost of a Crisis

Following the recent news that the RBS group have reported a half-year loss of £1.5bn, almost twice the amount seen a year earlier1 we’re starting to see financial cost of the series of latest debacles in the banking sector.

With RBS reported to have set aside £125m to cover the cost related to the recent biggest computer problem ever incurred by a UK bank, the £135 million the Group took to cover Payment Protection Insurance (PPI) mis-selling, and the £50million allocated to compensate small businesses who were mis-sold interest rate swaps2 – there’s a sizeable fund allocated to rectifying failures.  But despite the attempts to financially rectify issues, this doesn’t take account of the reputational damage caused to the brand.

The NatWest PR team went into overdrive – apology emails to customers, parachuting in extra staff for extended opening hours at branches – whilst pausing its usual ‘helpful banking’ marketing campaign for 3 weeks3, but how far did this go to prevent the fragile customer relationship with the bank from suffering?

As Phil Brooks previously highlighted in his blog only 5 months ago NatWest have been making clear headway in communicating its ‘Helpful Banking’ campaign and their Customer Charter and were edging above other banking brands on almost all key components of a customer relationship.

Looking at the same research conducted again after this most recent crisis, we can see whilst all customers’ relationships with their banks have suffered over the period, NatWest has taken a significant hit, particularly with rational and intentional aspects of the relationship.  NatWest customers are significantly less satisfied than in January, are also now significantly less likely to recommend, continue to use NatWest or say they are their preferred bank. 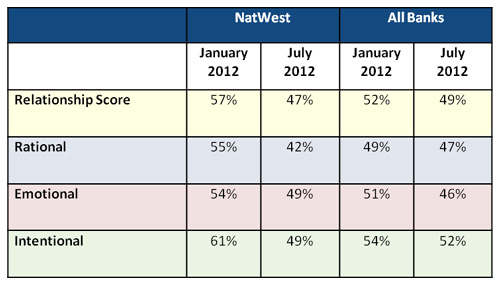 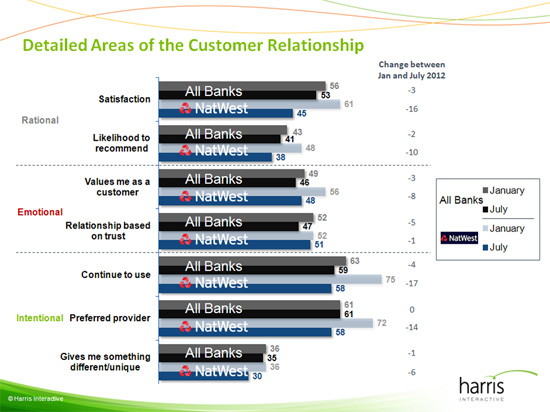 Perhaps surprisingly, considering the heart-felt tales of woe which emerged on the news, the emotional elements of the customer relationship see less of a change.  Indeed, the element of trust remains stable for NatWest’s customers, with only a small decline over the 6 month period, and NatWest now sees higher than the average score for all banks on this element.  This perhaps indicates that whilst there have been issues, customers are recognising that the brand is being honest in doing all they can to rectify the issues.

Whilst the past few months have been critical for the NatWest brand, the marketing teams need to build on this retained trust to ensure the damage to the brand doesn’t result in the intentional mass exodus which would knock the RBS group’s financials even further.

Confidence in your bank is hard to regain if it’s lost.  Perhaps this is a lesson the Banking sector will heed…until the next time.

Do your #brandvalues connect? With the evolving nature of the global pandemic and #inflation, understanding today'… https://t.co/9HdDMO5xkT