RBS boss declares banking the least trusted industry: but is that the whole picture?

“We’re in the least trusted industry and we’re one of those banks that aren’t trusted”:so said Royal Bank of Scotland (RBS) boss Ross McEwan this morning in a surprisingly frank confession on the BBC Today programme.

RBS losses
McEwan was attempting to explain RBS’s pre-tax loss of £8.2bn for 2013, its biggest loss since it was rescued by the government at the height of the financial crisis in 2008.  Certainly its figures make for grim reading, with a loss that is £3bn more than in 2012, as it battles to get back on an even keel.

On BBC Radio 5 Live this morning, financial analyst Louise Cooper commented that the figures reveal a picture of “horror, past greed, incompetence and corruption under Sir Fred Goodwin” and that things are getting worse instead of better as RBS pays for the clean-up caused by “mis-selling PPI, manipulating libel, mis-selling interest rates savings, blah blah blah”.

“Least trusted industry”?
But is this old news?  Sure, things hardly look rosy for RBS or for the industry as a whole, but RBS is now making an operating profit, with the losses incurred due to previous errors, not current ones.  And “the least trusted industry” – are they sure?  Does this take account of the wider picture?  Or is this just rhetoric designed to cause a stir and lead the general public to believe that a massive sea change is on its way?

‘Trust’ is one of those terms that gets bandied about – the ‘Holy Grail’ of customer service, notoriously difficult to gain, so easy to lose.  But how do banks compare to others? Well in fact, Harris Interactive has some recent data on this that we’d like to share with you.

In a November 2013 Harris Poll we asked how much people trust a variety of financial and public institutions, and, contrary to popular belief, who should come out at the very top but people’s own banks!  46% of people say they have quite a lot or a great deal of trust in their bank, and this is a staggering 10% above the 2nd placed institution on our list, which is the mighty BBC itself.

It is interesting to note that high street banks in general are less trusted, at 20%, and this supports findings we have seen in the past, where consumers tend to believe that the problem is with other banks rather than their own, and distrust the industry itself rather than the bank they are personally connected with.  Even banks in general, however, are more trusted than credit card, insurance and investment/pension companies. 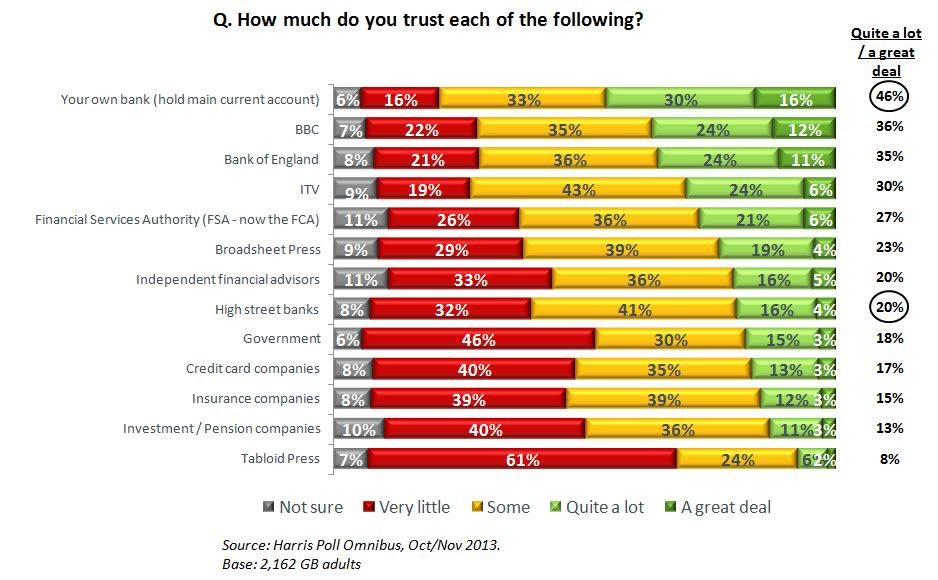 When looking at how much we trust the advice we receive from our bank or building society and comparing it to other sources of advice, it is a less positive picture, with just 19% saying they have a lot or a great deal of trust in advice given by bank or building society advisers, which is below chartered accountants (21%) and independent financial advisers (23%), and considerably below other industry professionals such as solicitors (39%), nurses (62%) and doctors (69%).1

Changes ahead for RBS
When McEwan refers to RBS’s large customer base then and says that “we need to rebuild the trust of that customer base” and promises to move away from the “absolutely abhorrent” industry practice of giving a better deal to new customers than existing ones, it can only be a good thing for consumers.  Perhaps by narrowing their focus onto their retail banking customers and promising to “get back to simple banking”, they will help to improve people’s trust in the advice they receive, in RBS as a bank and maybe also in high street banks in general.

But it’s not only RBS, or even high street banks, that could do with gaining more customers’ trust.  Perhaps some of us have got so used to pointing our finger in that particular direction that we have forgotten that all of us need to work to gain and maintain customers who trust us.  So enough of the bank bashing – for too long such an easy target.  After all, people trust their own bank more than the BBC!

For more information on the RBS announcement today, see http://www.bbc.com/news/uk-england-26364715

Are subscriptions the future of #videogaming? While not all gamers are on board with these services, the reality is… https://t.co/rQmUcxbYnK