The ‘Big Six’ energy providers have been in the news a lot recently with them each announcing gas price cuts anywhere from 5% to 5.4% over the last month, which will save their customers on average around £30 – £35 per year.

E.ON has also been in the news because of its energy deal with Age UK, which revealed they pay the charity £6m a year to promote its tariffs to elderly people. This deal has subsequently been scrapped following criticism and Ofgem stating they will be investigating Age UK’s behaviour.

Harris Interactive carried out a survey of 400 members of the public within an hour using Harris 24 to gauge awareness of this story. It appears news travels fast with almost two thirds (63%) saying they were aware of the story.

When looking at respondents who previously said they were aware of the E.ON and Age UK story, the level of disagreement to the price cuts being sufficient was higher, with 28% saying they ‘disagree’ and 42% saying they ‘strongly disagree’. This means over 70% do not feel they’re sufficient. 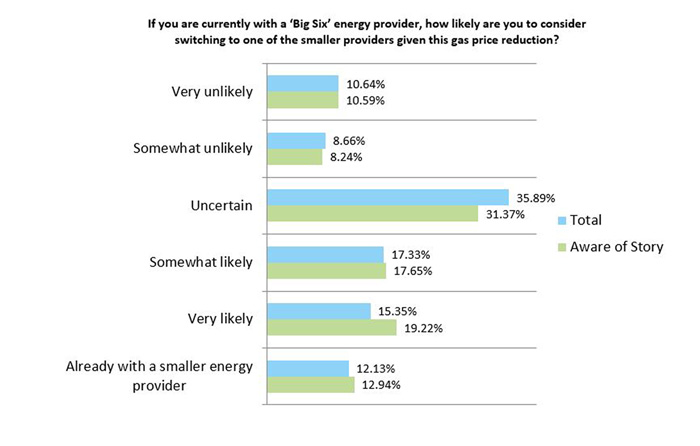 With the emergence of smaller energy providers such as First Utility and OVO Energy, who topped our recent energy customer power report which looks at competitor customer relationship benchmarking, the ‘Big Six’ need to ensure more than ever that they are providing a great service that meets their customers’ requirements. If they fail to do so its clear customers will look to switch to a smaller energy provider, which over one million customers have done in the last year alone.

If you would like discuss this research further or look to conduct specific market research for your company with industry expert insight contact Jonathan Pitts on 0161 242 1363 or email jpitts@harrisinteractive.co.uk