Brits may open-up to Open Banking over time, they just need more information and the right service

Last month open banking officially began: the dawn of a revolution that will let customers take control of their financial data and cash it in for better deals. It’s been getting us in Financial Services excited for a while, but are the Great British public at all interested? We repeated some survey questions from a little over a year ago to gauge whether the mood has changed.

To start, we looked at how people currently prefer to interact with their financial providers. The majority prefer either going online or through an app, with internet banking the most preferred channel of all, especially amongst 55+ year olds. 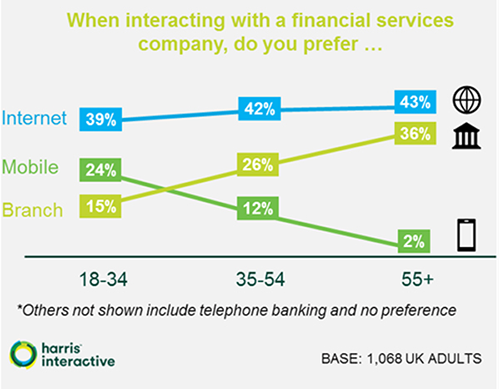 Over half of Brits have still ‘never heard’ of open banking, with a further quarter only saying they had heard the name. Just 9% stated they were somewhat or very familiar, which was highest amongst 18 to 34 year olds (18%). 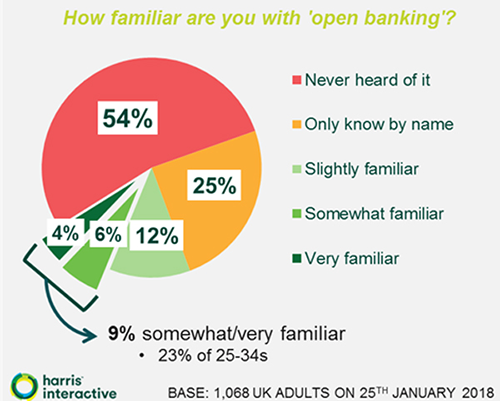 Of those who had some awareness, news articles (37%) and friends and family (21%) were the most common sources. 14% have received a letter about it from their bank. 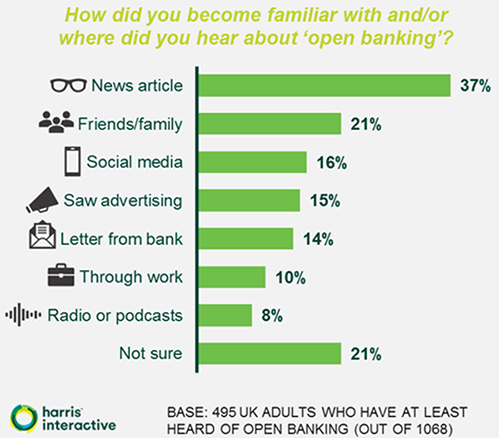 After being shown a description of open banking, 44% were ‘not at all’ interested while one in ten said they were ‘very interested’. The proportion ‘very interested’ was substantially higher among those who were already somewhat/very familiar with open banking (45%), suggesting that interest could increase with rising awareness.

The most interested are those aged 25 to 34, a third of whom are very interested, significantly more than any other age group. 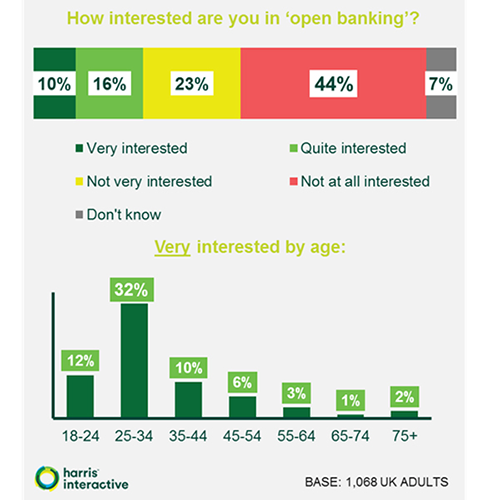 We then tested interest in specific potential open banking services. Around two fifths were quite or very interested in each– with ‘access to better products’ attracting the most interest (45%). The majority of those interested would be willing to permit access to their data, although around a quarter would not. This leaves a market potential of 27% – 33% across the four services tested, moderately better than the 26% interested in open banking in general. 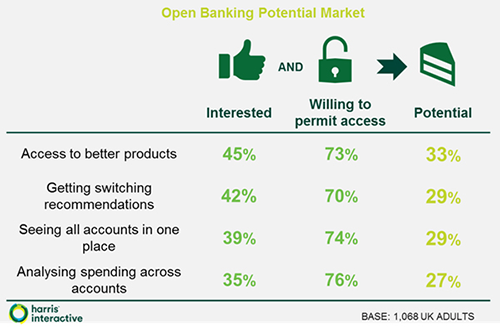 Overall, those already familiar with open banking, younger age groups and those who prefer using apps to interact with their bank, are more likely to be interested. For example, 61% of app-preferers are interested in being able to see all their accounts in one place and 63% of 18-34 year olds are interested in ‘access to better products’. The chart below shows that the younger age groups are both more interested in this specific service, and would be more likely to permit access to their data, yielding a market potential of 51% of 18-34 year olds likely to take up open banking if it provides access to better products. 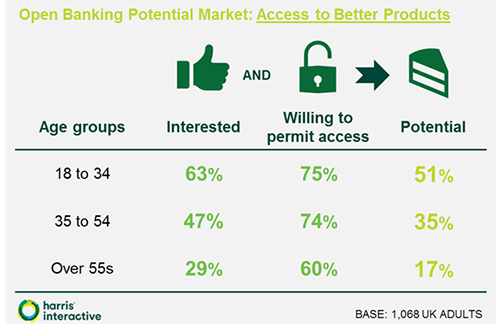 Developers of new open-banking products and services must be sure to emphasise the benefit to consumers. We see that those interested in an idea are very likely to be willing to permit access to their financial data to benefit from it, in fact this barrier almost disappears altogether among the most interested.

Finally we asked our respondents if they think they will be more or less open to open banking in 5 years’ time. We found slightly more people feel they will be more open than less, however the majority say there will be no difference or they don’t know. The under 35s are more likely to become more open (41% vs 15% less) whereas the over 55s are most likely to feel their views will stay the same. Overall this is an improvement from when we asked the same question a year ago, when more people said they would be less open in the future. Are we already starting to witness increased acceptance as open banking becomes a reality? 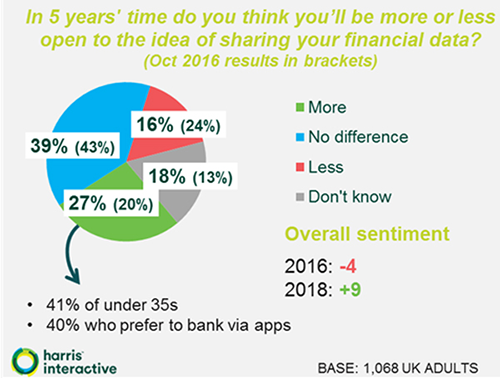 The use of contactless payment cards is an interesting case study to reflect upon. It was over 10 years ago, in 2007 that the very first contactless payments were made and at the time there were many of the same concerns about security and making it easier for criminals to get their hands on your money. Fast-forward to today and the blip of the reader is a common sound in shops around the country with more than a third of card purchases contactless[1]. Yet there is still much scepticism about contactless payments and the revolution is by no means complete.

In summary, there is very low awareness of open banking among the British public currently. As is frequently seen in new digital developments, security and privacy are the top concerns. Here we also see a lack of understanding about the benefits of open banking as a barrier to wider acceptance and indeed a quarter of people think they will be more open to it in the future. Introducing open banking is a long-term project. Now customers’ financial data has been unshackled, it is over to product providers to develop products and offerings that will entice customers.

The survey was conducted amongst 1,068 UK adults on 28th January via our Harris24 platform, with fieldwork complete within a few hours of launching. Results reported and nationally representative and weighted by age, gender and UK region.

The following description of open banking was shown to respondents:

‘Open banking’ has been introduced in the UK, meaning banks and building societies must let you share your financial data and pass it on to third parties, if you give permission. You would not need to share your login details or passwords.

The main idea is that individuals can allow apps and online services to analyse their spending and find better deals on everything from loans and mortgages to shopping and broadband. Customers can give, and withdraw, permission at any time.

61% of consumers say they’ve heard of #cryptocurrency, only 23% say they’re familiar with it. Read here for sentim… https://t.co/8Hc0II6vEl

Are you a #researcher looking to join a successful and growing team? Visit the @Harrisint_uk Careers page for our c… https://t.co/RFoA2aIvhy

Gain exclusive access to our new global research on the future of #agileresearch practices. Register for the Simply… https://t.co/E180QweGX4

Tech-driven #insights can be faster, cheaper, and better, but these aren’t the only factors driving change. Learn m… https://t.co/AZuj6f2FrC

Economic uncertainty is at the forefront as #inflation concerns have hit consumers across the globe. Register here… https://t.co/CnGoxBdoxn