Mobile phone company HMD Global has finally confirmed long-standing rumours by announcing the launch of a revamped version of the iconic Nokia 3310, complete with Snake, at Mobile World Congress in Barcelona.

The 3310, generally thought of as the first mass-market mobile phone and, without doubt, the most successful ‘feature phone’ of all time, was originally launched in the early 1990s and phased out in 2005. The re-launch has been widely reported by mainstream media whilst three new Nokia-branded mid-tier Android smartphones – which HMD will also be selling under licence – have received far less attention.

Some commentators have speculated that tapping into nostalgia for the 3310 is a clever way to re-energise the Nokia phone brand i.e. without the media focus on the iconic 3310, there might otherwise have been zero coverage of the smartphone range. Others have been quicker to see it as a gimmick that will do little to position Nokia as a serious player in the smartphone category.

We were interested to get at the truth, so we decided to investigate.

The day after the 3310 announcement, we interviewed a representative sample of 500 UK consumers via our Harris 24 platform.

The key questions we wanted answers to:

Nokia the most ‘visible’ brand again

Our research confirms that the 3310 announcement and subsequent media coverage have truly grabbed consumers’ attention. When asked which brands of phone they have seen, read or heard about in the past week or so, one in two mentioned Nokia; more than any other brand, including Samsung at 42% and iPhone at 35% respectively. Unsurprisingly, Nokia awareness peaked at 60% among consumers who had owned a 3310 the first time around. But the story also resonated well with the key ‘smartphone savvy’ demographic with 41% of 18-34 year olds also mentioning Nokia. 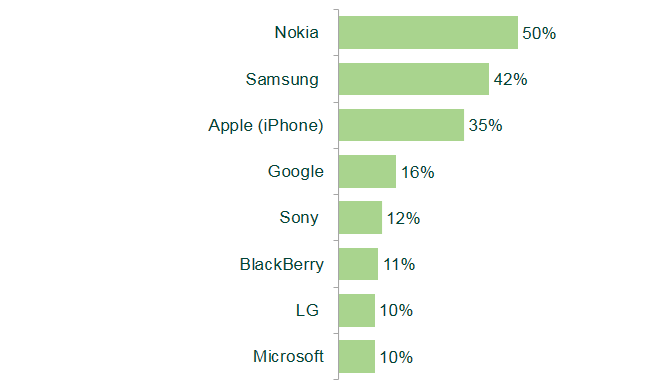 Smartphone message getting lost in the noise?

When we looked at what people took away from the media stories, findings were somewhat mixed. Only one in four clearly understood that a new line of Nokia smartphones will also be launched; with the majority only aware of the 3310 re-launch or indeed altogether confused about the specifics. However, the message about mid-tier smartphones did get through to more of the younger audience with 33% 18-34s picking up on this. 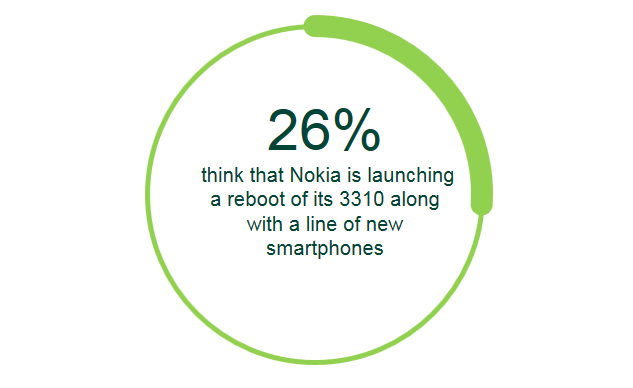 Nostalgia can be a very powerful thing – which we discovered when we asked how familiar people were generally with the 3310. Only a quarter of the UK public had not heard of the phone and, of course, many had owned one in the dim and distant past.
This is no doubt a major influence on the 27% of consumers who indicated that they would be more likely to consider buying a Nokia phone again in future as a direct consequence of the 3310 re-launch. This already impressive figure rises to 37% among the key 18-34 year-old demographic.
It will be very interesting to monitor whether HMD can capitalise on this heightened good-will towards the Nokia brand once the initial 3310 “buzz” has worn off. 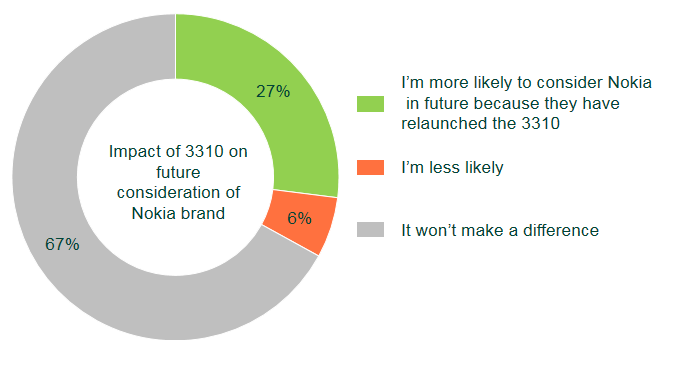 This survey was conceived of, designed, fielded and analysed within a 24-hour period.
If we can help you answer any urgent questions that you have about your brand, products or services, please get in touch with me on 0208 832 1602 or apirisinu@harrisinteractive.co.uk.