Mobile Banking Apps: Control Your Personal Finances from the ‘Palm of Your Hand’

Imagine you’re walking down your local high street and you spot some clothes that would look perfect for the dinner party you’re going to tonight, but hang on just a minute…the price is pretty expensive! Pay day seems light years away and you are unsure that you have enough money in your account. Previously you would have had three options:

1. Walk away
2. Take the risk – And slip into your overdraft
3. Quickly find an ATM machine and get to know the situation or phone your bank.

The new era of the Smartphone can do almost anything for you – including saving you a tedious trip to the bank or the nearest ATM through accessing your bank account via an app and transferring money from your savings.

But is it Safe?
When I first heard about a banking app, the initial thought that popped in my mind was, ‘this would be so useful but would it be safe?’

Having such personal information accessible from the tiny device that lies in our handbags or pockets can always be a worry. This is reflected by a KPMG study on the views of mobile banking, which shows that 66% of consumers say they fear their credit card details would be stolen and 62% fear the possibility of an intruder accessing personal information.

In the case of your mobile being lost or stolen it would be hard to access the app as a pass code/log in details are required and other safety nets are in place. However, if someone did manage to make a transaction from your account that was not you, would your bank refund the money? There are some security risks more difficult to prevent and come in the form of a malware or virus attack.

Consumers are encouraged to think of their Smartphone in the same way as a computer and security software is available from external sources. If you are lucky enough to bank with Barclays then they offer free security software for their customers (Kaspersky).

Banking 2.0 – Its taking time for some to get their acts together
Most of our popular retail banks have joined the bandwagon and offer us convenient facilities from the ‘palm of your hand.’ Focusing on some of the largest banks in the UK; HSBC, NatWest/RBS, Lloyds TSB, Barclays, First Direct, Halifax, The Co-operative Bank and Nationwide, there are some clear differences in these individual bank’s app services.

Research on UK mobile internet users 2011 from Antenna Software Inc has shown us that these are the most needed and frequently used functions. 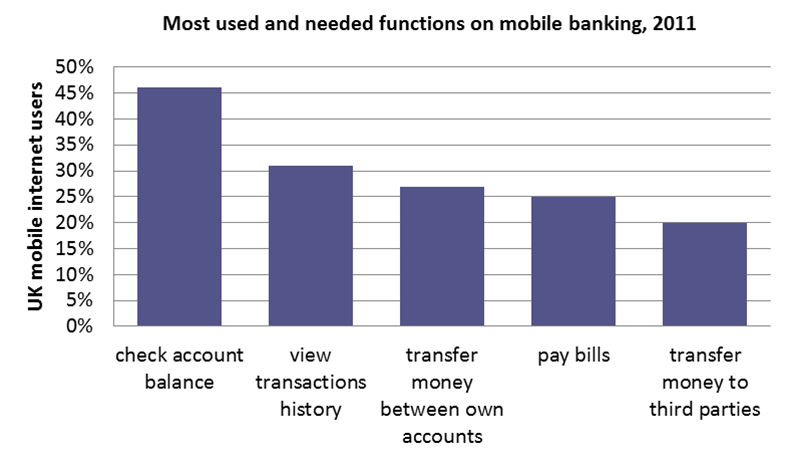 Looking at what each bank is offering I can see that Barclays and NatWest/RBS are way ahead with their innovative thinking. NatWest/RBS have even stated on their website that they will be coming up with an app to pay and receive money using mobile numbers soon (similar to Barclay’s Pingit).

Yet, reflecting on NatWest/RBS’ recent service problems, I would much prefer a bank that can function on the simple stuff rather than concentrating on creative ideas to impress us with. I’m sure the person who had to wait a weekend in prison for his bail money to go through because of RBS would also agree. Lloyds TSB, Halifax and First Direct are giving a reasonably good amount but this leaves me wondering why HSBC are offering the bare minimum.

According to the graph they are only offering two of the most used functions. They call themselves, ‘the world’s local bank’ so they should be ahead in bringing us a world class app. The Co-operative Bank are also lacking in the number of services being offered in comparison with its competitors.

However, most surprising is how behind Nationwide are as they are yet to deliver us an app. They have stated that they are working on it and will get it out to us shortly. Let us hope they eventually catch up in this technological race.