It’s raining it’s pouring… one in four are not insuring!

Britain’s favourite topic of conversation is the weather, but due to its unpredictable nature, when it comes to preparing for extreme weather conditions we seem to fall short.

As parts of the UK have been severely affected by recent storm and flood damage, the cost in insurance claims could rise to as much as £1.5bn.

Even more concerning for UK consumers is that it is estimated that a fifth of the overall cost could fall on those currently without sufficient insurance cover, including many small business owners. To compound matters, the Environment Agency continues to warn of ongoing flood risks in the UK.

Of course there has been much debate around what has or hasn’t been done to protect UK homes and businesses against flooding. Improving flood barriers may help, but in the longer term some suggest it is the way homebuilders construct properties, especially in areas designated high risk of flooding, that needs to be addressed. No doubt the debate will go on for some time, but whatever the outcome, it seems the risk of flooding in the UK will only continue to increase as extreme weather conditions become more frequent.

In order to understand the effects of storm and flood damage, we spoke to people living in the North, Scotland, Midlands and Wales. Using Harris 24, we were able to interview 804 UK adults in only a few hours and collate their views, opinions and experiences of the recent weather conditions and how it had impacted them. 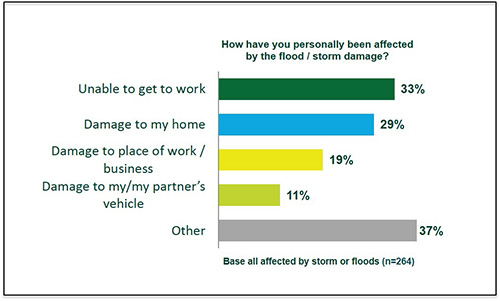 As a result of the extreme weather, one third of those who were affected said they were unable to get to work and three in ten mentioned damage to their home.

More than a quarter of those with damaged homes or vehicles were uninsured and, as a result, many without proper cover had to use personal savings to fund repairs.

Looking to the future, three in five of those who did not have cover now intend to take out insurance. Even among those who had insurance in place, nearly three quarters are likely to increase their insurance cover levels so as to ensure they are adequately protected.

Whether affected by storms and / or flood damage or not, nine in ten people agree more should be done in terms of proper defences, and the general consensus is that insurance companies need to provide more information on what constitutes adequate cover. Many small business owners have found themselves underinsured, so perhaps more can be done to provide information about what might be appropriate levels of cover based on the type or size of business and its assets. 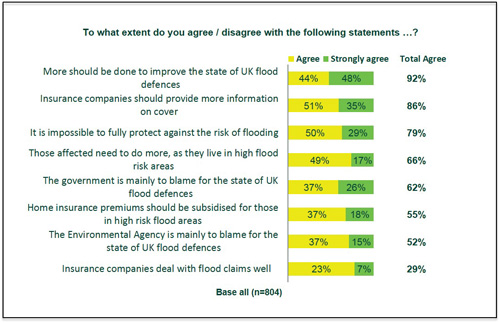 In fairness, insurance companies have continued to make improvements in order to help their customers who find themselves affected by adverse weather conditions; for example, some are using drone technology to assess damaged areas and, as a result, provide quicker responses to customers’ insurance claims.

According to the Association of British Insurers (ABI) more than 3,000 families are now in alternative accommodation and the average expected pay-out is £50,000 – this compares to £31,000 for 2013/14 winter storms. £24 million of emergency payments have been made to both families and businesses and costs for alternative home or business accommodation are paid directly by insurers. The cost to insurance may not increase premiums this year, however many small businesses may not be able to get back on their feet.

In response to some parts of the country becoming seemingly uninsurable, “Flood Re” – a government initiative – aims to help people understand and reduce the level of flood risk to their homes, while also enabling flood cover to be affordable for those households in flood prone areas.

Though full protection against floods is seen as impossible by most, feedback suggests a variety of things are needed to limit the impact of extreme weather in the future:

While the weather continues to be much talked about, general opinion is that more needs to be done to help those more likely to be impacted by adverse weather conditions. It is clear there are a variety of things that will need to improve before we can say we are dealing with such extreme weather adequately.