The on-going uncertainty of Brexit, Interest Rates and our depreciating currency took a backseat as we returned from the Bank Holiday weekend.

Instead, the media served us a plat du jour the last couple of days on how credit-card firms have automatically increased credit card spend limits, in some cases for those who are struggling to manage their debt.

Bank of England drew their attention to the credit card industry in July and expressed concerns over how long interest-free periods on credit cards and an increase in credit limits are contributing to the fastest growth rate in consumer credit since 2005.

With access to real-time insights here at Harris Interactive, I fed my curiosity by gauging 1,355 consumers on how they are managing their credit card debt and more importantly, their sentiment towards their credit limit increasing.

Building up credit card debt
We asked our consumers “how many times in the last 12 months they have been reminded that they are close to their credit limit”, where 42% reported that they had been reminded or alerted by their card provider.

Looking further into our sample, 44% reported that they have had their credit limit increased in the last 12 months.

With the recent coverage on automatically increased credit limit, 66% of these declared that it had happened without them asking it 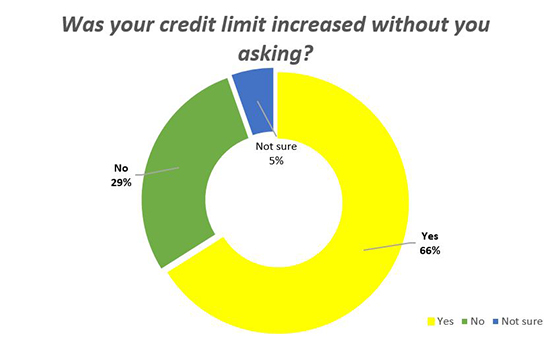 22% felt “Concerned about spending more” with 22% being “Worried about paying it back” and 15% “Angry” about the increased ability to increase spending without having asked for their limit to be increased – and just shy of a quarter (24%) of those whose credit limit had increased automatically felt “Extremely Worried” or “Very Worried” about their credit card debt increasing.

The annual reports from Credit Card Providers and Banks will expose you to terminologies such as “Digital Transformation”, “Technology platforms” and promises to simplifying usability for customers.

With this said, what does the consumer appetite look like? Here a few insights to look at:

With mobile phones becoming an important part of our lives, will credit card spend from devices contribute to a potential consumer credit bubble?

Contact me directly on 079 89 385 941 or at ASharif@harrisinteractive.co.uk if you are interested finding out more about this research and our Harris 24 approach.