Do UK Consumers have Trust in the auto industry?

In the wake of the 'emissions scandal'

When scandals break in the auto industry they are usually big news. GM’s ignition failure reportedly linked to 169 deaths was apparently known of for the best part of a decade. Toyota’s unexpected acceleration led to more than 10million vehicle recalls in 2009. In 2000 Firestone recalled in the region of 6.5million tires for fear of shredding, blow out or failings. As far back as the 1970’s saw Ford recall models of the Pinto due to incorrectly positioned fuel tanks that could explode in a rear-end collision, causing at least 27 deaths.

The latest scandal relates to VW and the rigging of emissions test results. Traditionally the VW badge has been a symbol of trust and reliability, but has the brand been heavily tarnished by the recent emissions scandal. 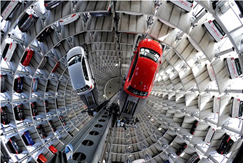 Martin Winterkorn (ex Chief Exec of VW) saw his dream realised early in 2015 when VW finally dethroned Toyota to become the world’s largest car manufacturer. This position is now being threatened as the company is forced to temporarily stop sales of diesel vehicles in a number of markets, whilst at the same time recall in the region of 11million vehicles globally. In the UK alone, there will be around 1.2million vehicles needing to be recalled, with Patrick McLoughlin (Transport Secretary) considering changing the MOT test from 2016 whereby should a vehicle have not returned to have remedial work carried out then it would mean an automatic fail.

As time passes, more and more details are being exposed, including the possibility of Martin Winterkorn having known of the issues with VW diesel emissions as far back as spring 2014. Also, it has been alleged The European Commission has been aware since 2013 that manufacturers had been fitting software devices with the ability to manipulate emissions tests.

So what does this mean for a highly competitive industry where words like brand, trust and reliability mean so much, and increasing focus being placed on innovation and being environmentally friendly whilst at the same time delivering performance.

In early October 2015, Harris interactive wanted to understand in more depth how the ‘emissions scandal’ was being perceived by the general public in the UK. In order to do this we posted some questions on the Toluna panel using the Quick Survey platform, whereby we were able to complete over 1,000 interviews over a short space of time.

Within the questions we looked at what was important to consumers when looking to buy a new car and what they thought of certain brands on the market. Finishing off with a section on vehicle emissions, their awareness of the VW scandal and how that had impacted their opinions of the brand, the wider German brands, and the industry as a whole.

Within the survey, VW owners represented the third largest group, behind Ford and Vauxhall. Looking at the VW Group as a whole (including Audi, SEAT and Skoda), this accounted for less than 1 in 7 taking part in the survey. 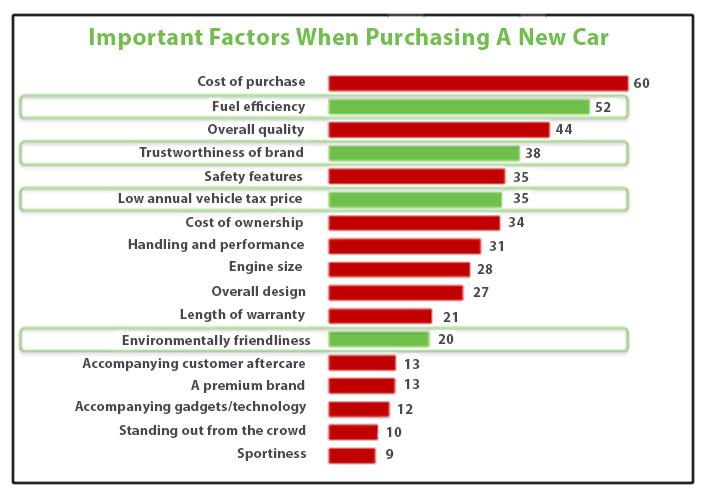 Aside from the Cost of Purchase, the most important factor to consumers when looking to purchase a new car is fuel efficiency, a key aspect of the vehicle emissions issue for VW. In fact, three of the top 6 important factors could be directly relevant to the emissions scandal, and could influence consumer choice; these being ‘Fuel Efficiency’, ‘Trustworthiness of the Brand’ and ‘Low annual vehicle tax price’. 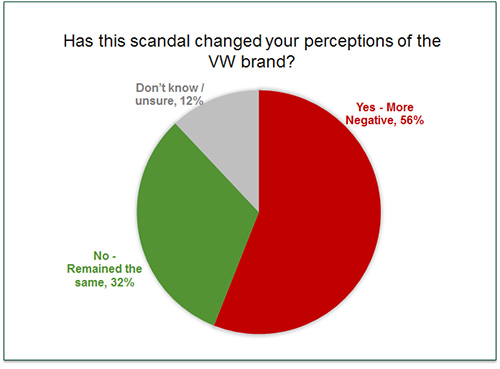 Of those aware of the emissions scandal, more than half now view VW more negatively than previously.

When asked of likelihood of purchasing VW both before and after hearing of the story, there was a definite shift down the scale, with likelihood down to 13% versus 19% before the scandal, and those unlikely to purchase VW rising from 45% to 55%; a 10%age point increase.

It is apparent VW are now being looked at less favourably. With what is deemed important to customers when buying a new car being directly related to the scandal, questions around trust and reliability of the brand are being asked, with nearly half of respondents suggesting they have little or no trust for VW.

Not only is VW feeling the pressure, but the news has had a cascading effect on other German manufacturers, and to a lesser extent, the industry as a whole; both showing a higher lack of trust amongst consumers than would normally be seen.

If you would like to pulse your customers and gain robust insights in a fraction of the time of traditional surveys get in touch – our automotive research specialists are ready to assist. We also have a range of solutions including cutting edge online research communities – providing you with ongoing access to customer and wider market insights when you need them.