The Financial Ombudsman Service (the Ombudsman) revealed this week that it received around 576,000 complaints in 2013 – up a massive 38% on the previous year, and “depressingly high”, according to Chief Ombudsman, Tony Boorman.  Of all complaints received, over half (56%) were upheld, which equates to 323,000 complaints. Bearing in mind that the Ombudsman is the last port of call for customers dissatisfied with their provider, these are worrying figures indeed.

The scale of the problem
Whilst the Ombudsman only gets to see complaints referred by customers following an unresolved or unsatisfactory internal investigation by the firm in question, the figure of complaints received by firms themselves is considerably higher. 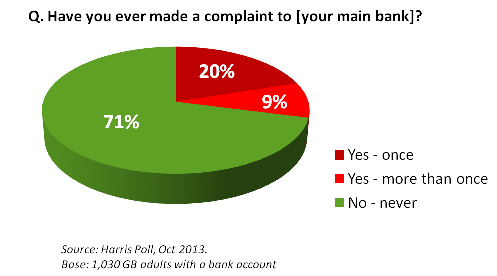 This is a staggering number when you consider that 46 million of us hold a bank account: it means that around 13.3 million people have complained about their bank account at one time or another.

We clearly know that not all of those complaining to their bank are satisfied with the outcome, hence why some go on to complain to the Ombudsman.  But how many consumers in total are actually left dissatisfied following making a complaint? 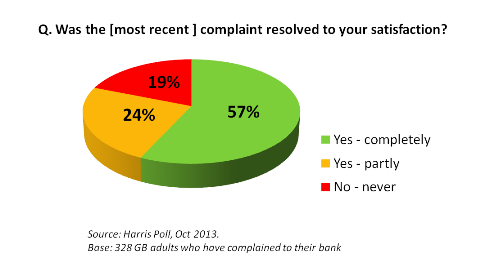 The proportion of those saying ‘no – never’ rises to a third amongst those consumers who say they are likely to switch bank account in the next year.

How a provider deals with a complaint can clearly have a profound impact on the customer relationship.  Harris Interactive’s Relationship metric takes into account how customers think, feel and will act towards their bank.  Measured out of 100, overall relationship score varies from 63 on average for customers who have never complained down to just 10 for those who have complained but feel their complaint was never resolved.

The cost of complaints
In terms of those complaints reaching the Ombudsman, it is encouraging to hear that it saw a significant reduction in bank related cases last year, plus a slight reduction in investment cases.

It is mis-sold payment protection insurance (PPI) that is still the main cause of complaint by far, accounting for more than 80% of the Ombudsman’s work.  To date, over £22bn has been set aside to pay customers back for PPI.

Despite budgeting for increases, it has been a difficult year for the Ombudsman with far more complaints received than anticipated, resulting in further delays in resolution for consumers and higher management costs.  The total financial cost resulting from complaints made to the Ombudsman, including industry levies and case fees, is projected to be £314m for the complete 2013/2014 year (up from £249m in 2012/2013).

And remember that this is just the cost of complaints that make it to the Ombudsman.  With 29% of consumers having ever made a complaint to their bank the total industry cost of investigating these complaints will be much, much higher – all money that would be better used in enhancing the customer experience.