Nintendo is an iconic company in video gaming with its beloved global franchises such as Mario, Zelda & Pokémon, and its ability to revitalise the gaming market with ground-breaking consoles such as the SNES, Gameboy, 3DS and Wii. Now Nintendo has released its next generation console: the Nintendo Switch.

At Harris Interactive we specialise in gaming research, and on launch day we used our fast-turnaround Harris 24 service to gauge the public’s awareness and reaction to the Nintendo Switch.

Gaming habits and awareness of the Nintendo Switch

Firstly, we found the majority of the UK population aged 16-54 play games on any device (83%). Half the nation play on home consoles, while mobile/portable gaming is common among nearly two-thirds of the population (63%), highlighting the popular rise of mobile gaming in recent years.

The Nintendo Switch is aimed at those who want to play games in the home and on the move. We found over half of the nation (56%) were aware of the Nintendo Switch prior to launch with awareness highest among console gamers (73%), but also high among mobile gamers (63%).

This all highlights the current popularity of gaming and Nintendo’s potential to appeal to both core console gamers and casual mobile gamers alike. 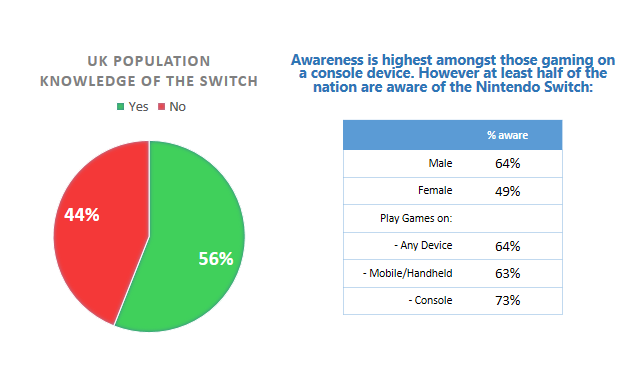 Perceptions of the Nintendo Switch

Over the years, Nintendo has crafted their core franchises and paired them with innovative console releases. This tactic has proved to be a high risk, high reward strategy. Although the Wii was the highest selling console of its time, its successor, the Wii U, failed to hit the mark. The Switch is Nintendo’s seventh home console, with an ambitious quest to bridge the gap between the experience of a home console and the flexibility of a mobile gaming device. This concept of continuing to play on the move exactly as you left off on a home TV screen appealed to two-thirds (68%) of those aware of the Nintendo Switch.

In general, gamers like the Switch’s features and the flexibility it offers as a gaming device at home as well as on-the-move. Focusing on games, less emphasis is placed on 3rd party titles and we see two-thirds (64%) of those aware of the Switch would like/love Nintendo branded games coming out for the console, underlining the strong affinity with Nintendo’s games/franchises. 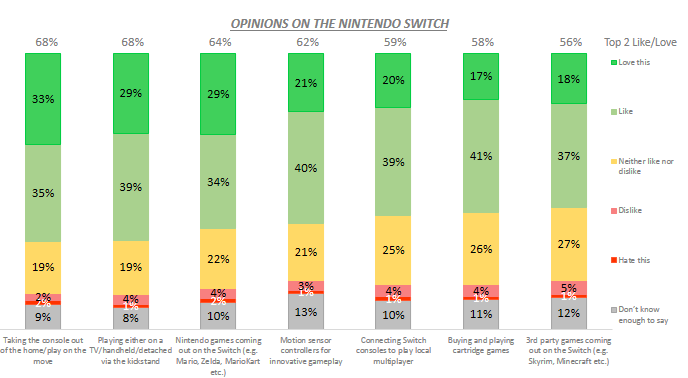 Q: From what you know about the Switch, which features do you like or dislike?

Likelihood of purchasing the Nintendo Switch

Over a third (38%) of those aware of the Switch say they are interested in purchasing the console in the next 3 months. 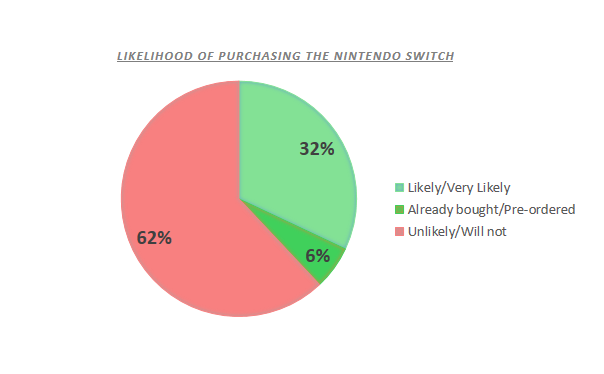 Q: How likely are you to buy the Nintendo Switch at the current price of £279.99 in the next 3 months?

The key barriers to purchasing relate to price/value and competing with existing console ownership.

Q: Why are you unlikely to buy the Nintendo Switch?

This highlights the challenges for the Nintendo console and its aim to expand the market. Nintendo needs to appeal to mobile gamers who are benefiting from a boom of “app store” and free/low-cost games, as well as core gamers who already own a console. Remember, more than half of the nation told us they already play games on a home console device showing this is a highly crowded market. This will be a challenge for Nintendo to compete for both living room space and spend on other similarly priced consoles. Even more so when you consider both PlayStation and Xbox are releasing iterations of their consoles aimed to either take up less space for a cheaper price or a more powerful device aimed at giving core gamers an enhanced gaming experience. In short, Nintendo’s competitors are already competing for a sizeable chunk of Nintendo’s target market.

Attitudes towards the Nintendo Switch

The nation does, however, seem interested in the Switch. From what they already know about the console the majority of those that aware thought the device looked fun (75%) and innovative (70%), while two-fifths (42%) are excited about the release and nearly half (46%) say the console fits in with the ways they want to play video games.  This backs up Nintendo’s aim to appeal to a wide range of gamers. Furthermore, Nintendo already has a clear fan base and just over half of those aware (55%) want backwards compatibility so they can play the Nintendo games they love. 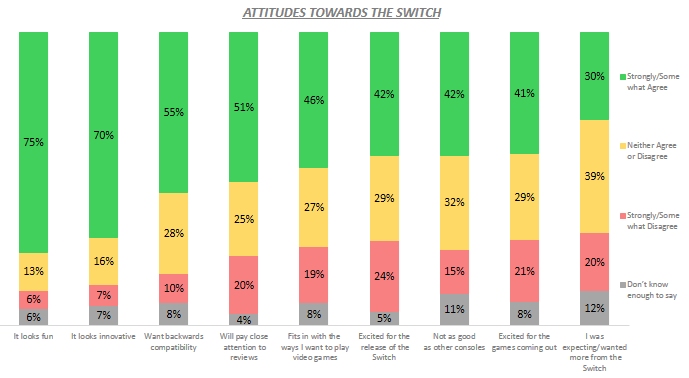 Q: Please tell us how much you agree or disagree with the following about the Switch…

At the same time, half of those aware (51%) will pay close attention to reviews before committing spend, and two-fifths (42%) already think the Switch is not as good as other consoles, so the device needs to live up to expectations before it can count on success.

With the Switch, Nintendo is trying to hit the same success of the Wii, and are combining a strong home console device with the features and playability that made their portable devices (such as a 3DS) successful. We believe the Switch has potential, especially for a market where mobile has made video gaming more accessible than ever before, however it will still need to compete with the console juggernauts, Xbox and PlayStation, as well as easy to access casual gaming on mobiles.

The Switch won’t appeal to everyone, but it does offer a unique and desired way to play video games. Its success could rely on its ability to differentiate from the other home consoles, Xbox and PlayStation, both of which are continuing their focus on core gamers, releasing more powerful versions of their next-generation consoles. However, Nintendo has shown success in aiming for unique and fun orientated approaches to gaming, and with loyal fans of Nintendo’s games/franchises, it will be interesting to see if the Switch can find its niche and/or expand the market.