The Competition and Markets Authority (CMA) recently made a recommendation for the UK banking industry to enable ‘open banking’. Open banking involves sharing data securely or using API technology to allow banks to tailor services to individuals based on their personal circumstances. In the words of the CMA, this will provide benefits in the way of “reliable, personalised financial advice, precisely tailored to your particular circumstances delivered securely and confidentially”1.

Since the Open Banking Working Group was established in September 2015 at the request of HM Treasury, focus has been on devising an Open Banking Standard – a framework to guide and steer the development of how open banking should be implemented and used.

The Open Banking Standard acknowledges that one of the primary issues that must be overcome is alleviating security concerns so that consumers are encouraged to share their data. Research carried out by Harris Interactive via Harris 24 in October 2016 on the future of banking, suggests that public opinion on open banking is mixed, with data security/privacy concerns cited as the main barrier.

Initially, when prompted with some of the benefits that could arise from open banking, almost two thirds would be interested. However, when asked if they would be willing to permit access to their financial data in order to be able to receive the service benefits, we found that almost half of those interested would be unwilling to let their bank or a third party access any of their financial data. This leaves just over one third of the general banking population who are currently likely to be interested in open banking. ‘Access to better products and services to suit you’ and a ‘Website or tool with all your financial information in one place’ were the benefits inspiring the most interest.

Q. Please state how interested you would be in each of the following benefits that could arise from ‘open banking’? And if interested, would you be willing to permit access to all of your financial data to either your main bank or a third party, in order to be able to get the following service benefits? (BASE: 1973) 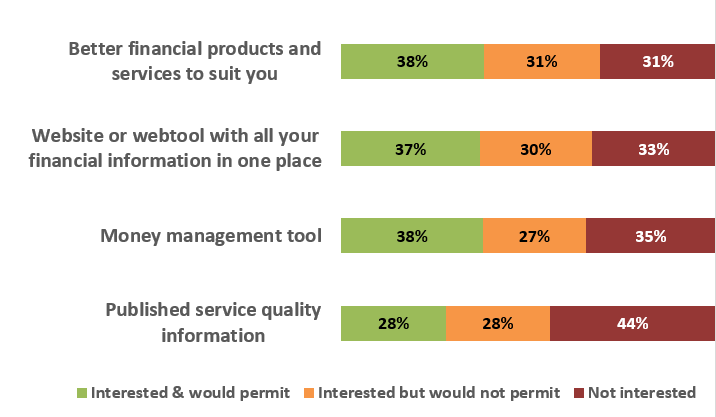 When asked why they might not be interested in each potential open banking benefit, the majority cited concerns with data security/privacy and fraud. 39% of those not interested or not willing to permit access to their data to see all their financial information in one place cited data security concerns and 18% said it was because of a ‘lack of trust in the financial industry overall’ (compared to fewer than 5% who said ‘lack of trust in their bank’ Not knowing enough about the open banking service was the second reason most likely to be stated. As with online banking before it, promoting the benefits of open banking and allaying data security fears look to be the key challenges for the CMA and financial providers to overcome. 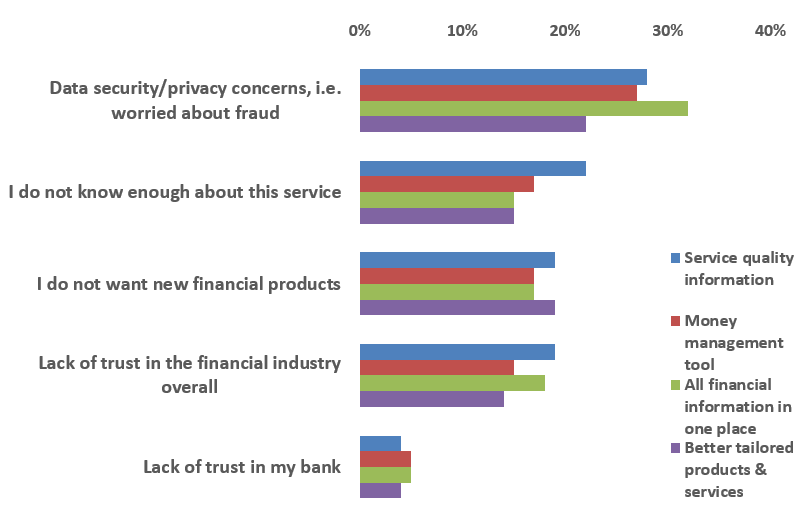 Finally, we asked respondents to think ahead to five years’ time and consider if they would be more or less open to the idea of sharing their data with financial providers. Whilst the majority don’t feel that there will be a difference in how they feel, a slightly higher proportion (24%) anticipated being less open to sharing their data with banks and other third parties than would be more open (21%) suggesting that consumers anticipate being increasingly data security conscious in the future.

Q. Thinking back 10-15 years ago, few people welcomed the idea of sharing their data online through social media, or accessing their bank account online, but today this is commonplace. Now thinking ahead to in 5 years’ time, do you think you will be more or less open to the idea of sharing your financial data with other financial providers? (BASE: 1973) 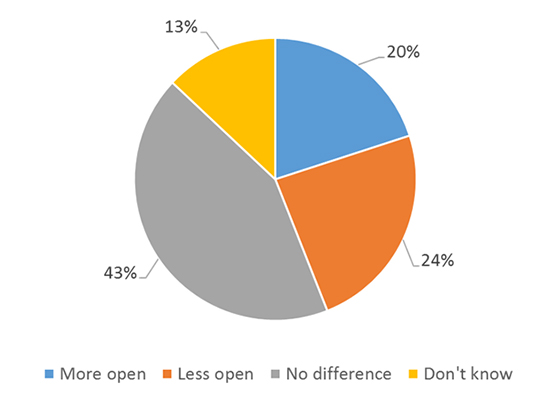 Our research suggests that whilst the benefits of open banking are appealing, it also raises security concerns for many; a barrier that the CMA and financial providers will have to overcome. There will always be those simply not interested in new banking technology or the proposed benefits they will bring. However, the fact that our research suggests that two thirds of consumers will be interested in tools that enable them to manage their financial information in one place demonstrates that open banking has the potential to meet future banking customers’ needs.
………………………………………….

Methodology
The survey was conducted amongst a nationally representative sample of 1,973 UK adults aged 18+ on 4th October 2016 using a Harris 24 online survey. Data was weighted to be representative of the UK population by age and gender.

61% of consumers say they’ve heard of #cryptocurrency, only 23% say they’re familiar with it. Read here for sentim… https://t.co/8Hc0II6vEl

Are you a #researcher looking to join a successful and growing team? Visit the @Harrisint_uk Careers page for our c… https://t.co/RFoA2aIvhy

Gain exclusive access to our new global research on the future of #agileresearch practices. Register for the Simply… https://t.co/E180QweGX4

Tech-driven #insights can be faster, cheaper, and better, but these aren’t the only factors driving change. Learn m… https://t.co/AZuj6f2FrC

Economic uncertainty is at the forefront as #inflation concerns have hit consumers across the globe. Register here… https://t.co/CnGoxBdoxn