In August 2013, the world’s first lab-grown burger was cooked and eaten. There are claims that, in as little as five years, we could all be eating ‘cultured meat’, a form of agriculture where meat is grown from cells. As well as removing the need for animal slaughter, lab-grown meat has been argued to be a solution to world hunger. Harris Interactive wanted to find out people’s opinions on this potentially ground-breaking concept, so we questioned 1,010 men and 1,072 women in the UK to find out more. 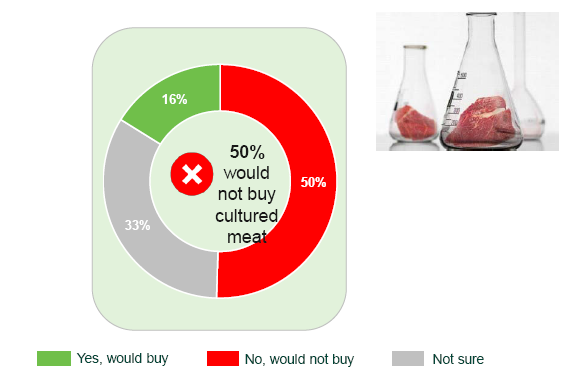 Q: Would you ever buy ‘cultured meat’ grown in a laboratory?

The initial reaction to the idea of cultured meat is predominantly negative, with half of consumers flatly rejecting it, and only 16% saying they would buy it. What is clear is that a large proportion are just not sure (33%).

When we delve deeper into attitudes by gender and age, there is a distinct difference by gender. Men are significantly more likely to say they would buy cultured meat (24%), compared to women who are unconvinced. There is also a notable difference between age groups; over 55s are significantly more likely than any other age group to say they would not buy cultured meat. So, men and younger people seem to be slightly more receptive to the idea.

When Brits were asked if they had heard of cultured meat before, 61% were not even aware of it – despite media claims that we could all be eating it in 5 years’ time!  It appears that we are quite simply opposed to the idea of cultured meat without knowing much about it. When asked if cultured meat is a good thing, a majority (40%) sit on the fence. The fact that a third of people aren’t sure whether they would buy cultured meat suggests consumers aren’t informed and need more information before making a choice. Better education around what cultured meat is, the need for it and its potential advantages may encourage those who are unsure to be more open to the idea. 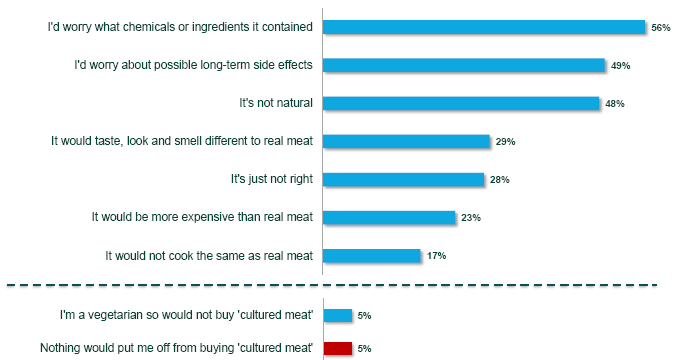 Q: What, if anything, would put you off buying ‘cultured meat’? Please select all that apply.

Main concerns for Brits are around the chemical content, the long term side effects, and that it is not natural. The most important factor that would encourage people to eat cultured meat is knowing that it is safe – 41% agree that this would encourage them to eat it. Perhaps some reassurance about side effects and chemical content would go some way towards allaying fears. However, nearly half cited ‘it’s not natural’ as a discouraging factor which will prove a much more difficult barrier to overcome.

Although the initial reaction to cultured meat is not that positive, men and younger people have shown themselves to be more open to the idea. However, with women holding the purse-strings in many households combined with the power of the grey pound, it is women and the over 55s who will need to be the focus of any campaigns to educate and allay fears. It is clear that at this stage, many are both uninformed and uncertain about cultured meat. With some education and reassurance, those who are unsure may be encouraged to be more open to the idea of cultured meat.