Post-Brexit reflections – and is ‘Regrexit’ really a thing?

Well what a night it proved to be: the most momentous political decision of my lifetime.  Despite our poll amongst UK employed calling it right, indicating as it did a narrow win for Leave, I, along with many others, predicted a win for Remain, convinced by the bookie’s and markets’ confidence, expecting a late swing to Remain and the late deciders to opt for the status quo.

But it wasn’t to be and Friday was a day of shock as it became clear that we were to be Out of the European Union, with 52% voting to Leave, whilst 48% had opted to Remain.

Within hours of the victory for Leave, the tumbling pound, Farage’s victorious grin and Cameron’s teary resignation, #Regrexit was trending on Twitter as stories were emerging of some Leavers starting to have doubts.  Was it a protest vote, an anti-establishment demonstration of frustration, a cry to be heard..?  Was it that that drove people to vote Leave rather than any real desire to break away from the EU?  Had people really failed to grasp or believe the warnings of tough times ahead?

Reports indicate these may very well have been amongst the reasons for voting Leave, but in our post-Brexit poll conducted on Friday and Saturday we found that 86% were content with the way they voted:

Most significant here is the regret of those not voting last Thursday, at 1 in 4, with over 1 in 3 just not sure how they feel about their decision not to let their voice be heard.

If we factor in both those that have changed their minds and those that didn’t vote but say they would if they had another chance, according to our data, it would switch things around the other way to 52% Remain, 48% Leave, with around 1.2 million more on the Remain than the Leave side.  But that is democracy, and a demonstration of why your vote always matters!

In these first few days there are more feeling negative than positive emotions (45% positive, 55% negative), with those who voted Leave now most likely to be feeling Confident (58%) and Excited (45%), whilst those who voted Remain are feeling Worried (71%) and Sad (51%).

It’s natural that those who voted to Leave are feeling more positive about the future than those who voted to Remain, especially when we consider that most people are, indeed, content with the way they voted.  But, nevertheless, in the immediate aftermath of the referendum vote, worries are running high, with the economy, price of consumer goods, the financial markets, business in the UK and jobs topping the list. 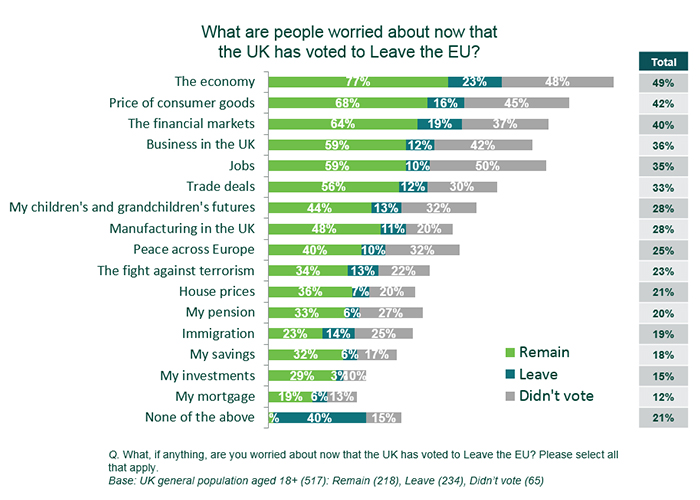 Whilst the macroeconomic issues are uppermost of people’s concerns post-Brexit, the microeconomic worries at the bottom end of the list are still in significant numbers and will be cause for concern for those working in the financial services industry: not only will they have the immediate earthquake of the dropping FTSE and pound to contend with, but they will also seriously need to consider the 20% worried about their pensions, 18% about their savings, 15% about their investments and 12% about their mortgage.

For ordinary people in the UK, whether they voted Remain or Leave, the list of worries looks set to be here for some considerable time to come.  57% think it was right for David Cameron to resign as Prime Minister, and now we have the unraveling of the Opposition too with the flurry of front bench resignations seen on Sunday.

And, in an area where it seems the nation is continually split down the middle, it should probably be no surprise the pattern continues in answer to the question many have been asking as to whether or not Cameron and the Conservatives were right to hold the EU referendum in the first place: 54% say Yes, with 34% No and 12% not sure.

Of course tensions are heightened right now, and knee jerk reactions will likely settle, but we as a nation have made a profound decision, the consequences of which we are only just starting to experience, let alone comprehend.  Politically, economically, financially, socially and culturally, it looks like we are in for a rough ride.