A couple of days after Chancellor Philip Hammond announced the Spring 2017 Budget and there is much talk in the media of a possible U-turn (or is that a partial U-turn?) in response to the backlash about the manifesto pledge U-turn made in the Budget announcement.  Now the British public may be forgiven for wondering why all the talk seems to be about politicians, their rebellions, marginal constituencies and the local elections to come in May.  And they would have a point.

So here we dissect the results of a Harris24[1] survey where we asked directly following Hammond’s speech whether people agree or disagree with the announced changes and how they’re feeling overall about the state of the economy after the Brexit vote.

Usually in our post-Budget polls we see the personal allowance increases, that have been a feature of the past few Budgets, at the very top of the list for public approval, and this time the announcement that the tax-free allowance is to rise as planned was met with agreement by 76%.  But surpassing it this time was the investment boosts for health and social care, with the £100m to place extra GPs in A&E next winter seeing 80% saying they strongly agree or agree, with 79% saying this of the extra £2bn for social care over the next 3 years, with £1bn available in the next year.  Whilst for some, this investment represents a sticking plaster on a wound that needs serious attention, the investment is still very much welcomed by the public, who place health and social care at the top of their list of importance amongst the areas to be covered by a Budget (66% Extremely / Very important), ahead of the State of the economy (63%).  It is also these areas which people feel are most likely to be good for them personally, with 73% saying this of the funding for GPs in A&E and 61% saying this of the extra social care funding.

The biggest thumbs up and thumbs down reactions from the public are shown below, and demonstrate that, alongside health and social care investment, the public also appreciate the education funding boosts and clampdown on tax avoidance. 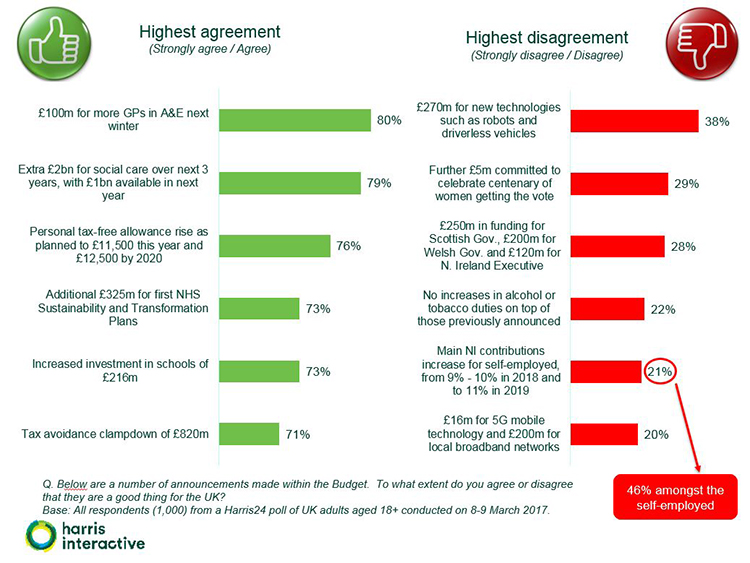 Many people are ambivalent about the changes, either unsure of the implications or feeling they won’t affect them, so the active disagreement is lower than agreement.  However, investment in modern technology, celebrating the centenary of women getting the vote, investment in the regions and the well-publicised National Insurance Contribution (NIC) increases for the self-employed have provoked the biggest thumbs down in our poll.  A fifth overall disagree with the NIC increases and when we look at those that are themselves self-employed this rises to 46%, whilst 29% agree with it.

Tax increases are never going to be supported like investment (despite one of course depending on the other), but it is interesting to see the public are not fully on board yet with investment in new technologies such as robots and driverless cars.  There is likely a worry here around the impact on jobs, and perhaps investment in this area is seen as less essential or impactful relative to others – although robotics are already benefitting the NHS and other healthcare providers.

This Budget contained a few announcements to support women or those taking a career break, and whilst the celebration of female suffrage received a luke-warm reception, the new funding of £20m to support the campaign against violence against women and girls was well received, with 68% agreeing this is good for the UK.  This is unfortunately slightly less supported by men than by women, at 62% compared to 73%, and 10% of men and 4% of women actively disagree with this announcement.

All in all, this latest Budget has been broadly summed up as being rather dull, and it was notable for its absences: nothing on pensions, car emissions and air pollution, defence, the housing crisis or even Brexit.  However, it was accompanied by an announcement of the 2017 growth forecast being upgraded from 1.4% to 2%, and people overall are feeling generally that things are on an even keel – at least for now.

Since the Brexit vote and Theresa May became PM, 42% think that the general economic conditions of the UK have stayed the same; however, 31% feel they have got worse, whilst only 18% feel they have improved.  Unsurprisingly, those that voted Remain are more likely than average to think things have got worse, at 47%, whilst those that voted Leave are more likely than average to feel things have improved, at 30%.  It is interesting to see though that, amongst those that did not vote in the EU referendum, only 2% feel things have improved since, whilst 29% feel things have got worse.  It certainly looks like there is some ‘Regrexit’ here – and this is supported by the 41% that agree with the recent House of Lords amendments to the Brexit legislation, compared to 35% that disagree with them.  Incidentally, it has been fascinating so far to watch the new BBC documentary series Meet the Lords, to get a rare view into the workings and daily life of the Upper House, and it is difficult not to admire the octogenarian Lord Heseltine, sacked for dissension.

As to the Government, well despite the Budget blandness, uncertainty over our economic future post-Brexit, and the breaking of a General Election manifesto pledge, the Conservatives are 9% more trusted than Labour with the economy (36% vs. 17%), and are enjoying a 15% lead in voting intention (40% Conservative, 25% Labour, 12% UKIP, 10% Liberal Democrat).  So, for now at least, Hammond can breathe a little sigh of relief.  It looks like he must watch more closely for the dissension behind him than that coming from opposite.  The Conservatives’ dominant position at present of course is a direct result of Labour’s perceived weakness: with 65% saying Labour is currently doing a Very bad or Bad job, compared to only 18% saying it is doing a Very good or Good job, there is much work for them to do if they are to challenge effectively, as an Opposition should.  It is the Labour peers and cross-benchers, alongside Conservative rebels, that are most likely to give the Government restless nights at present.

To discuss the research cited here or for access to the full Harris24 Budget poll results, please contact Georgiana Brown, Associate Director – Financial Services, at Harris Interactive on gbrown@harrisinteractive.co.uk or on 020 8832 1611.